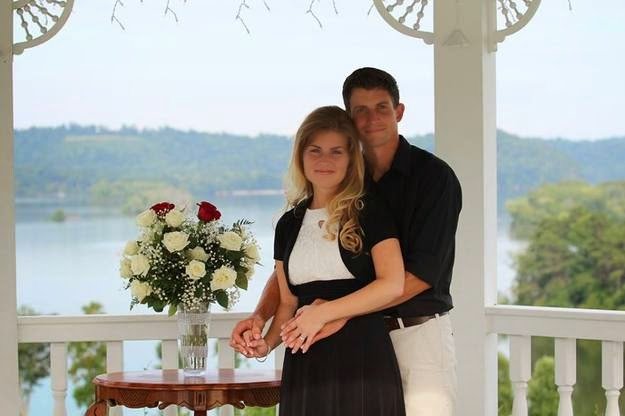 “I finally worked up the courage to ask you…I Love You!
~ Yf…Forever…for Always…for You!”

I put this note inside the ring box instead of the ring. I thought that
this would surprise her just a little bit more! As we walked into the
gazebo, I reached down and picked up the white box and opened it and
handed the ring box to Erin and asked her to open it. I could tell she
was slightly puzzled…but really excited! It almost doesn’t seem real
thinking back upon it all now. It happened so quickly! But yet it will
forever be etched in my memory as one of the sweetest and most precious
moments of my life! It felt like a bit of heaven!
Erin opened the ring box and read the little note. When she finished
reading, I knelt down on one knee and held the ring up and asked, “Erin
Elise, will you marry me?” The look on her face was that of so many
emotions! She sweetly said “yes!” and my dream came true! The following
is really hard to express with mere words…I honestly don’t know how to
describe the feelings that I had, the preciousness of the moment, and
the happiness that surrounded us! My heart was overflowing with
gratefulness! I was truly overwhelmed! I knew in my heart of hearts that
I didn’t deserve the Girl that I was holding! God was so good! I
couldn’t thank Him enough!!
A verse that God gave me years ago had become so very true in my life!

Psalm 84:11 “For the Lord God is a sun and shield: the Lord will
give grace and glory: no good thing will He withhold from them that walk
uprightly.”

Although I have made many mistakes, God has been so faithful to give me
“good” things. And He hasn’t just give me good things…He has given me
the Best! Erin is truly the very best for me and I am eternally grateful
to the Lord and to her for making my dreams come true!
The rest of that special day was spent rejoicing together and just
enjoying each other and God’s goodness! A special dinner awaited us at
the lodge. We talked, cried, laughed, smiled and just enjoyed the
beginning of the Sweetest Chapter Yet!